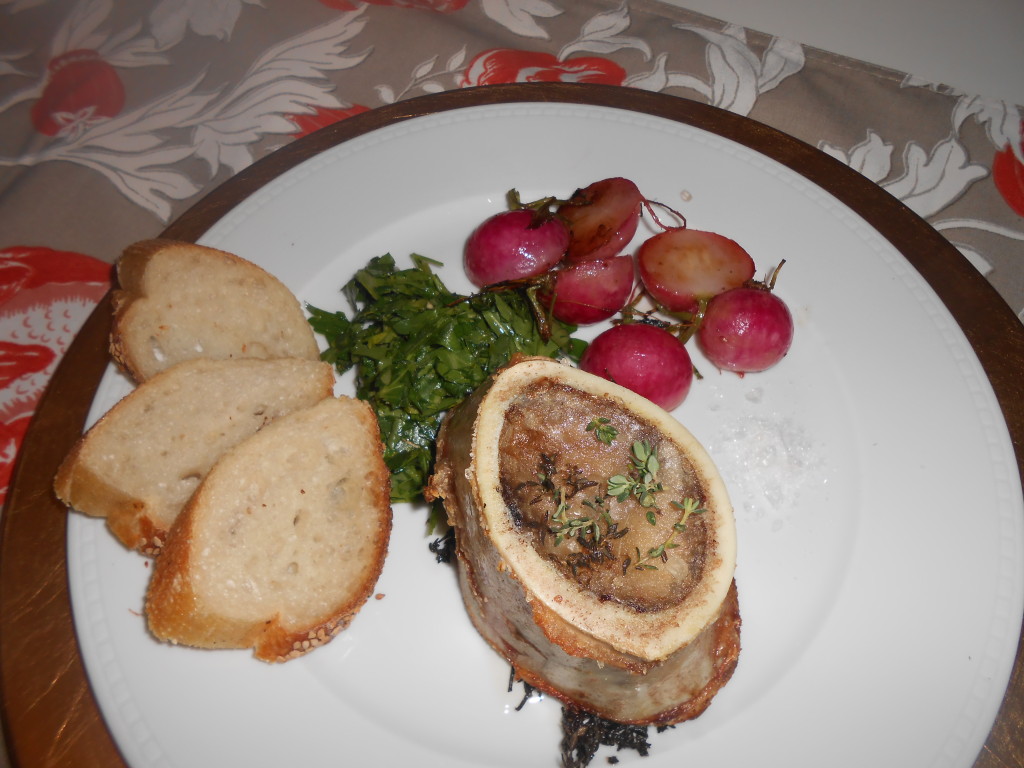 I have such a strong memory of the first time I really ate bone marrow (on it’s own, not as sauce fortification).  Craigie on Main, circa 2012.  The bones were cut on the long side, so a narrow trough of glistening fatty marrow, browned and salted was exposed.  It was served with crunchy baguette- and intended to be eaten smeared on the bread.  Like butter.  It tastes like vaguely beefy butter- smooth, rich, slightly sweet- and when seasoned with crunchy salt, and perhaps lifted with a little acid- it really sings.

Since then, I have sought it out and  ordered it wherever and whenever possible.  It is usually treated quite simply-  why ruin a good thing?  So last weekend when Mike and I were thinking on things we hadn’t done before (at home) and wanted to try- roasting our own marrow bones was top of the list.

Quick research revealed that this was not going to be difficult.  Some people soak the bones in salt water prior- we did not, but how could it hurt? The consensus was to roast at a high temperature (425 or so) for about 20 minutes.  Liberally season the cut sides and just toss ’em in the oven and serve with bread. 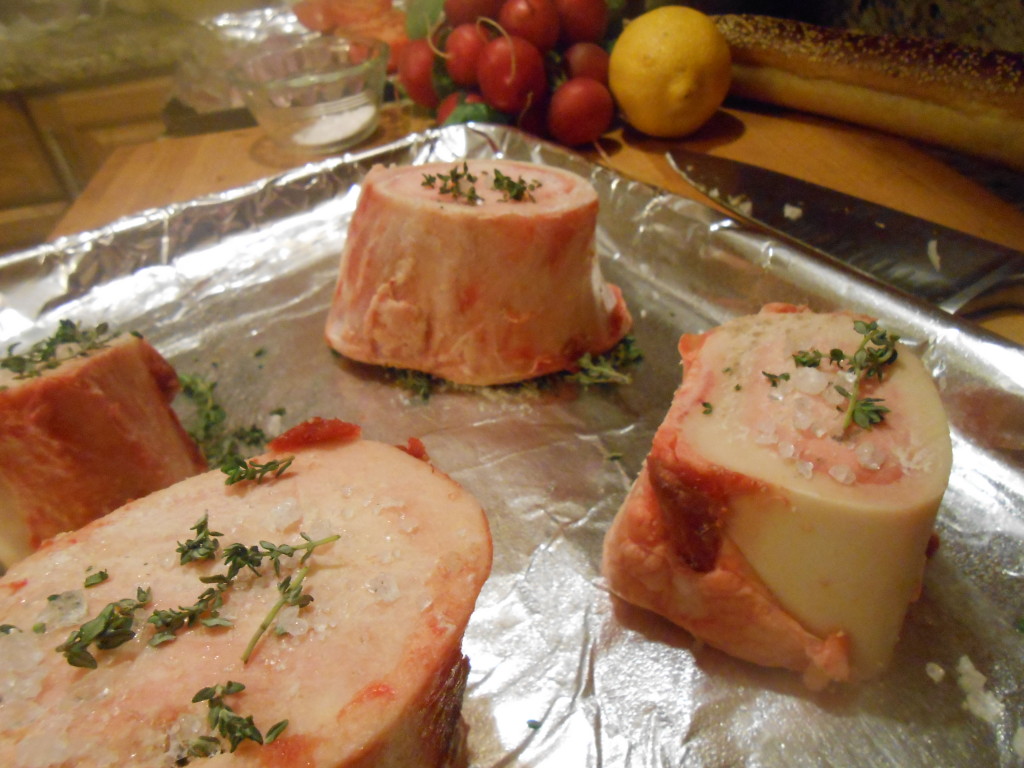 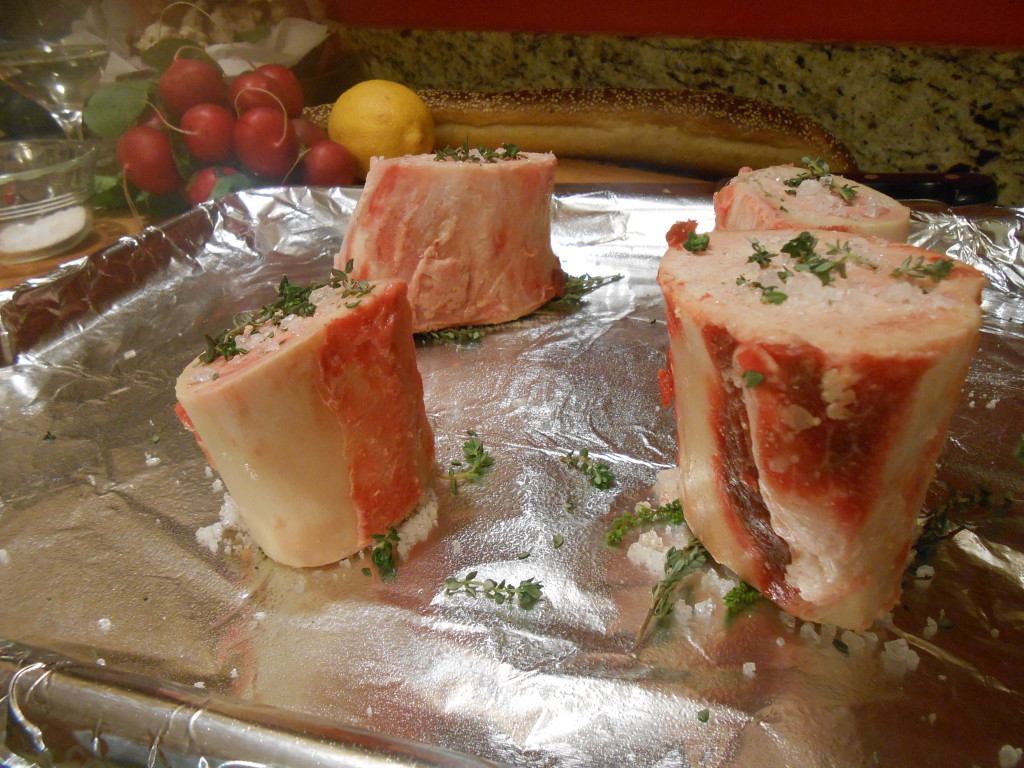 It occurred to me that radishes would pair nicely; radishes go well with salted butter- and what’s so different about marrow?  Mike suggested roasting the radishes to bring out some sweetness and cut their edge a bit-  so we did. 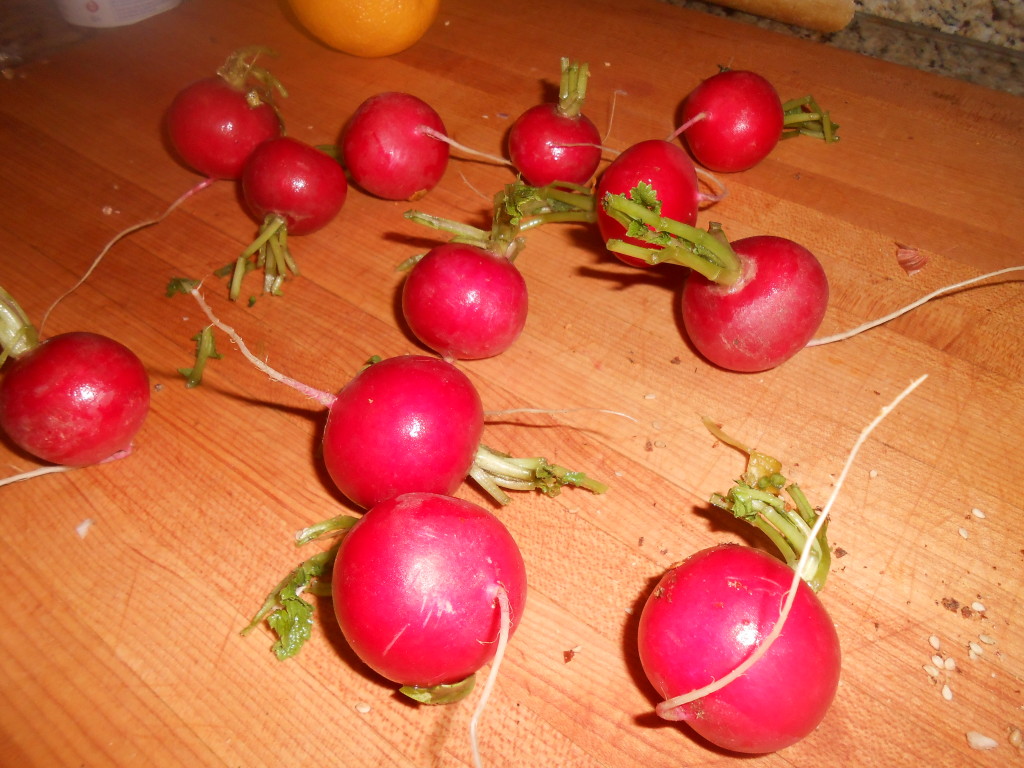 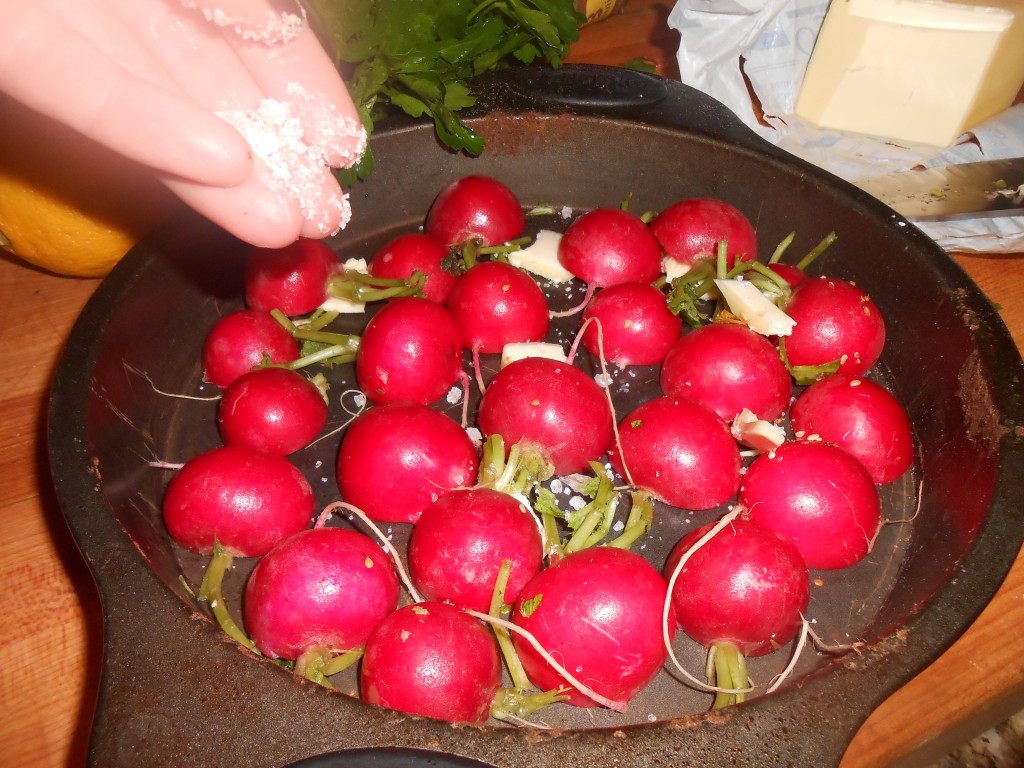 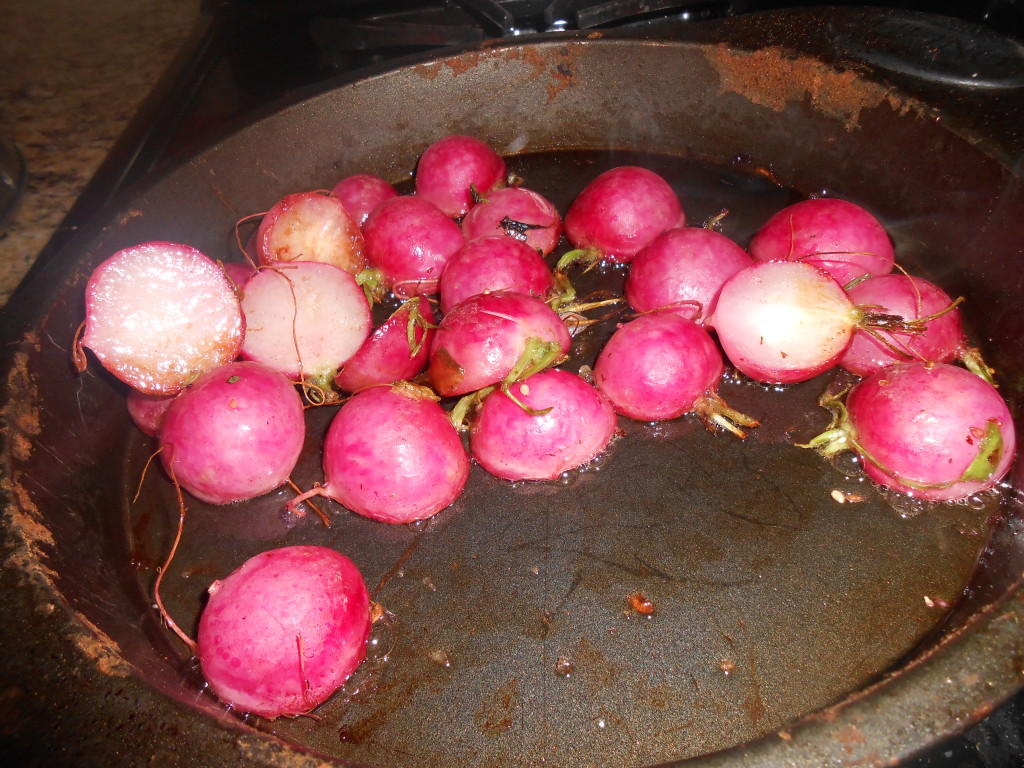 We cut the radishes in half (so they would have a nice flat surface to spread marrow on) and roasted them in a bit of grass-fed butter.

I felt strongly that we needed an acid component to cut the richness of the entire dish- something to cut the fat and keep our tongues interested- so I made a very quick “gremolata”-  chopped arugula and parsley, with lemon zest and some lemon juice. 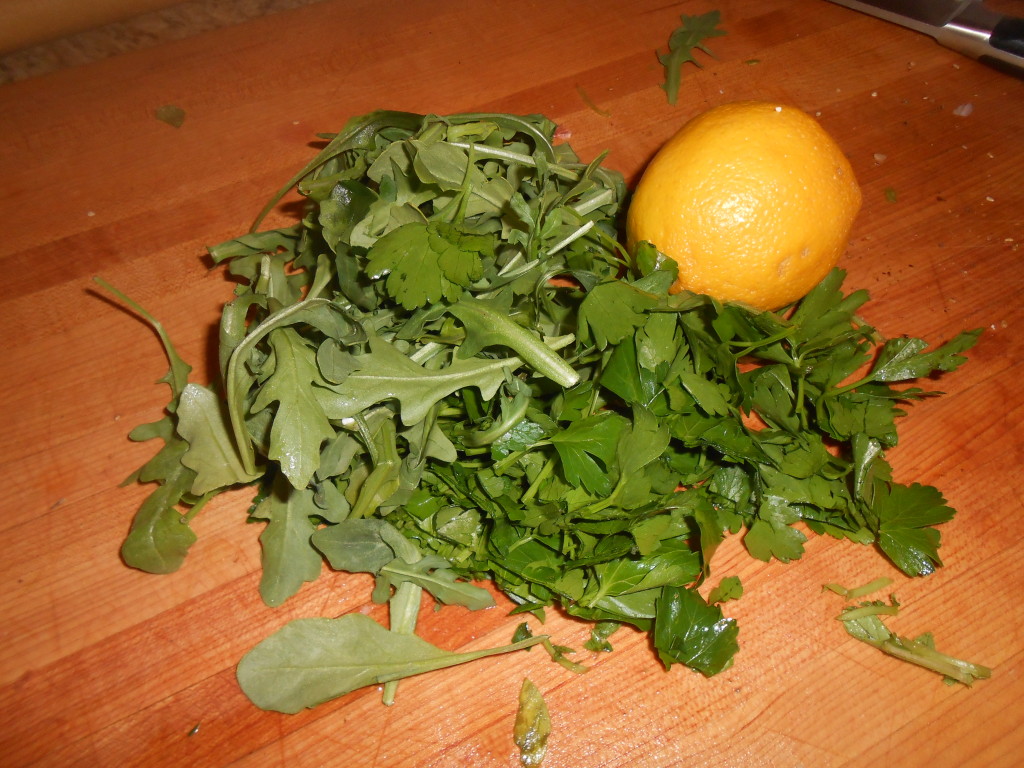 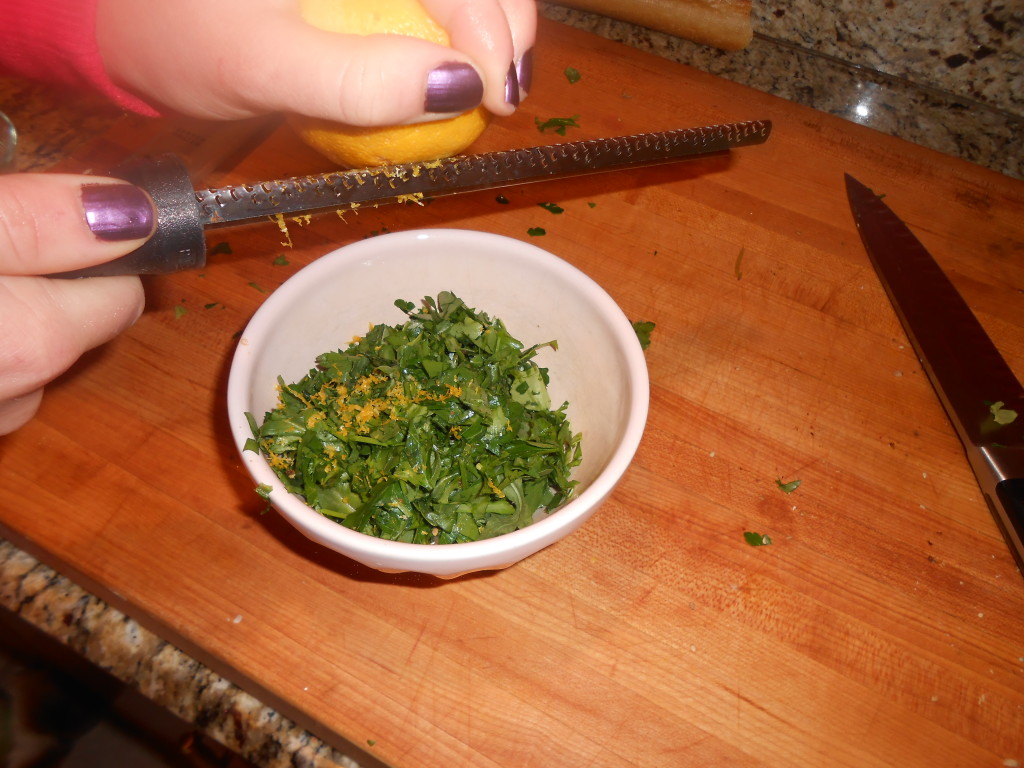 Then the beef was done- 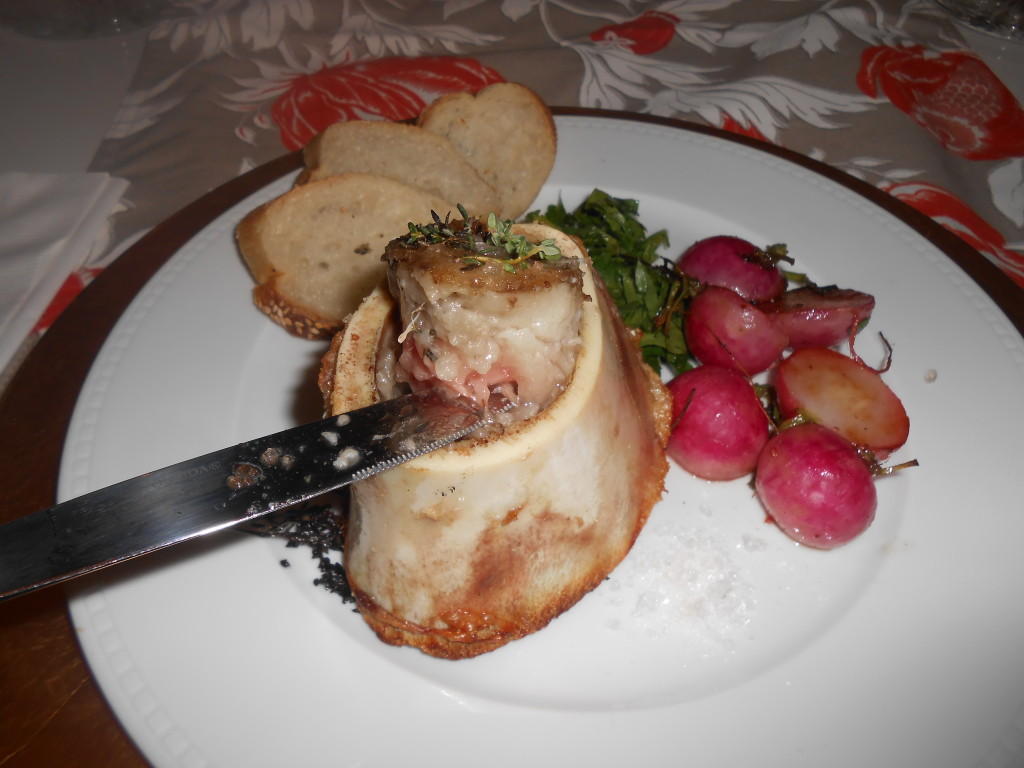 NOTE:  Beef bones can be purchased easily at your butcher (they will usually cut them to order).  I have also seen them in the freezers near the meat counter at Whole Foods.

A HUGE PLUS:  This is a super cheap appetizer!!!  Beef bones are seriously inexpensive.  Buy a ton of them so that you can make your own beef stock or enrich any sauce with all of the collagen that the marrow contains. (it thickens and glossifies sauces!).

HUGE PLUS, PLUS: Marrow, while fatty, is a nutrient dense food.  It contains massive amounts of vitamins and minerals and because of the collagen content is great for your joints, skin, and hair.  SO GO FOR IT!. 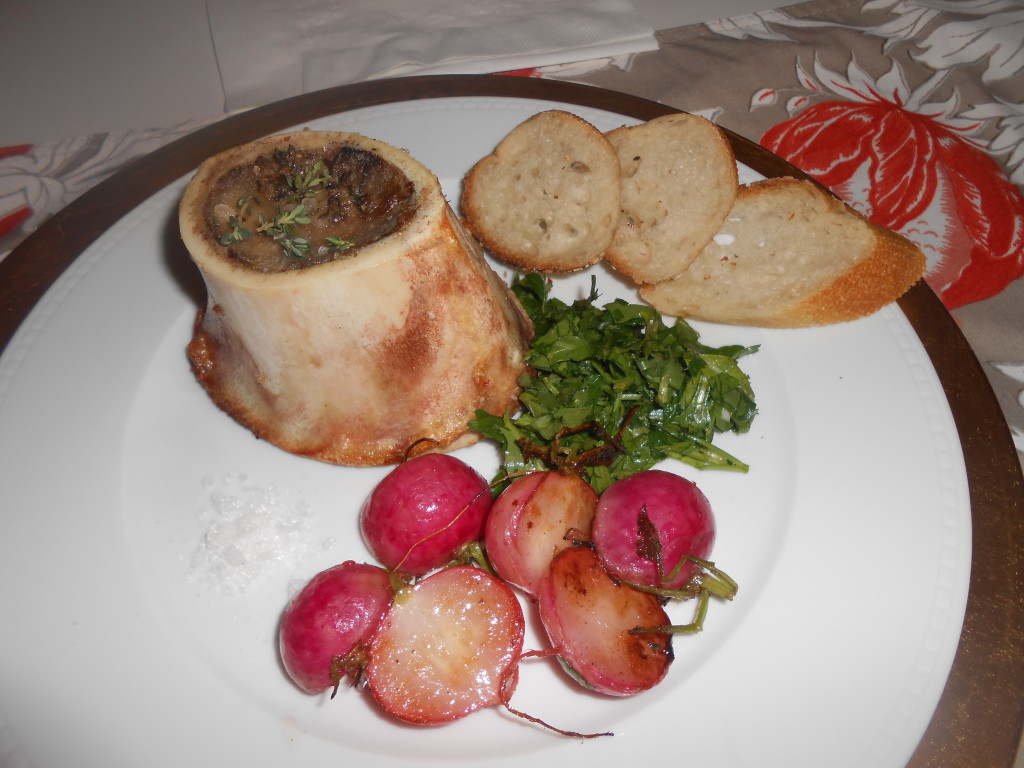 Suggested way to eat- spread some marrow, gremolata and radish on the baguette and eat as a crostini!  Salty, sweet, rich, crunchy.  MMMMMM.