We left off with me wallowing in my misery- every thought- every runner I saw outside my window literally “set me off”.

I was a bear to my husband, my family, everyone.

I started making baked donuts like a fiend.  My sugar intake increased 10 fold.

I was wheeling around my house in an office chair.

I tried to do things that you shouldn’t, like host a super bowl party and make a lot of the food yourself- because your husband and his best friend are running the race you should be running in.   (I wish I had a pic of Mark running with a bib that said “Kristina”)- HA!….   during the prep for this super bowl party I went into the pantry (wheeling in my chair) to get a bunch of Asian ingredients for Thai inspired chicken wings- and dropped an entire bottle of soy sauce on the floor.  Which shattered.  Into a thousand pieces.  I cried.  Kristen came over and helped.

Finally, my aqua jogging belt arrived.  I scoured the internet for workouts to do and found a good number.  I attacked the first workout.

But my damn leg hurt during the workout.  The pressure of my muscles moving was causing stress on the bone.  At my check-up, my doctor suggested toning down the aqua jogging for another couple of weeks, and sticking to swimming using only my arms and dragging my legs.  DRAGGING MY LEGS!!???

MY LEGS ARE MY LIFE.  That was my thought process.  How am I supposed to maintain fitness?  I am going to get SO FAT.  More wallowing.  More donuts.

Eventually (almost 4 weeks) later, I was able to aqua-jog without pain, and began water running about 4 nights a week, alternating with swimming.  I SOO WISH I HAD PICTURES.  It looks silly.  I would listen to either music or podcasts on my cell phone, wrapped in a bag, that I would hold in one of the “aqua shoes” (they’re made out of floaty material)-  and as I alternated between hard efforts and easy efforts my splashes and flailing were massively entertaining to the rest of the gym’s pool users.

I worked up to doing a “long run” of about 3 hours…  with Boston dreams still dancing in my head.  What wasn’t happening for me was a super speedy recovery.  My doctor warned me that it would be about 4 months before I could really run…  and with a diagnosis in January for an April race- that wouldn’t leave much (if any) time to run.

Eventually, in March, I was cleared to begin using the elliptical.  With no resistance.  gah.  But all of these things change and improve, and by the end of March I was allowed to add resistance… and begin running.  10 minutes at a time.

My first “longer” run was Easter morning with my Mom (nice symbolism there- right?  Rebirth, renewal, reviving my running!)-  and it was about 5 miles.  I would be lying if I told you Boston was not on my mind at that point.  The marathon was 2 weeks away (Easter was March 31st last year)…  and I had run 5 miles.  That equates to 26.2, right??!!!

In fact, I brought it up several times with my family and my husband’s family that Sunday-  should I?  What if?  I got mixed feedback.  Aunt Anita was my biggest cheerleader- she affirmatively and enthusiastically told me to run it and have a great time.  My mom was uneasy- the last few months were miserable for me, and I could risk re-injuring my leg and a major set-back if I ran.

April 13th (the Saturday before the Marathon)….  Mike and I went to the expo.  I was still going back and forth on what I would do-  but as I picked up my number…  bought a jacket…  wandered the wayyytooocrowded expo, meandered by Kara and the other elites signing posters, I made my decision.

I was running the Marathon on Monday.

I told no one (except my office, since DUH I wouldn’t be in).  I posted on Sunday night to Facebook that I was getting ready for the race…  and that was it.  I did not get a group together to cheerlead…  I did not invite anyone to a post race party- because I had no idea if I would finish or not.

The plan that I made was this:

Run with my health card, $60 (cab fare if I needed to ditch the race), and not one but two cell phones in case one ran out of batteries (one for music and the other purely as back-up).  I would exit the race if I experienced pain in my leg that wasn’t normal marathon pain.  I would run for 2 minutes and then walk one minute- no matter what.  That would give my leg “rest” time from impact throughout the race.

So Monday morning, Mike and I drove to Hopkinton (an easy, 45 minutes) 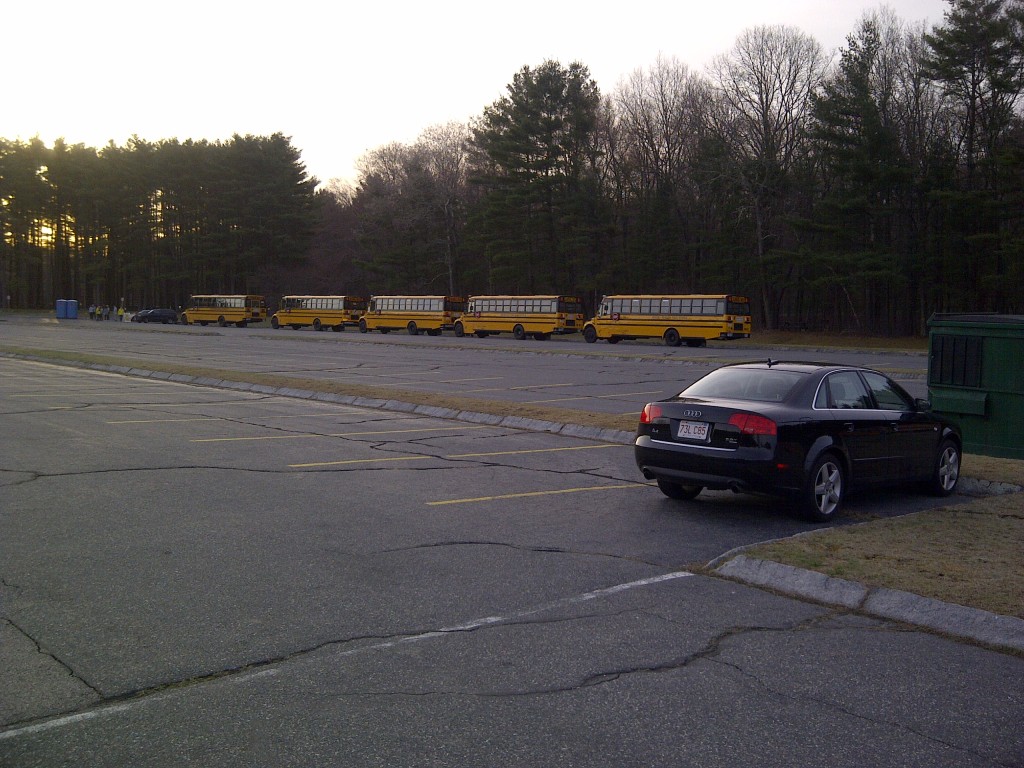 As you can see, we had plenty of time and It was not hard to do.

And I headed off to the waiting area: 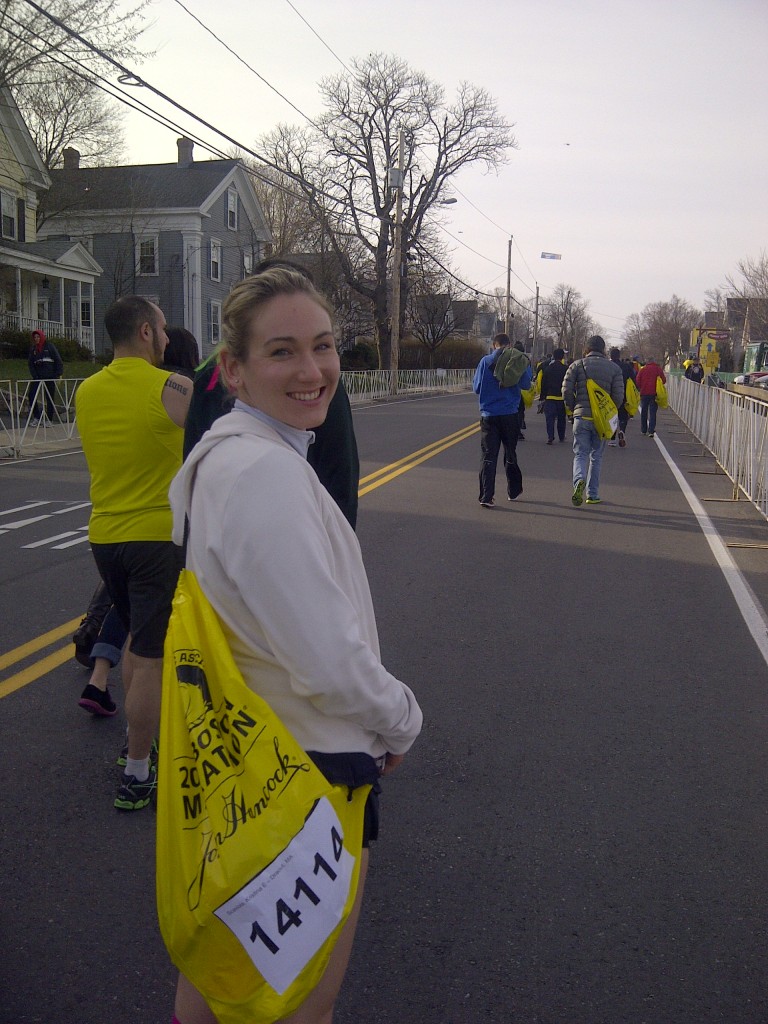 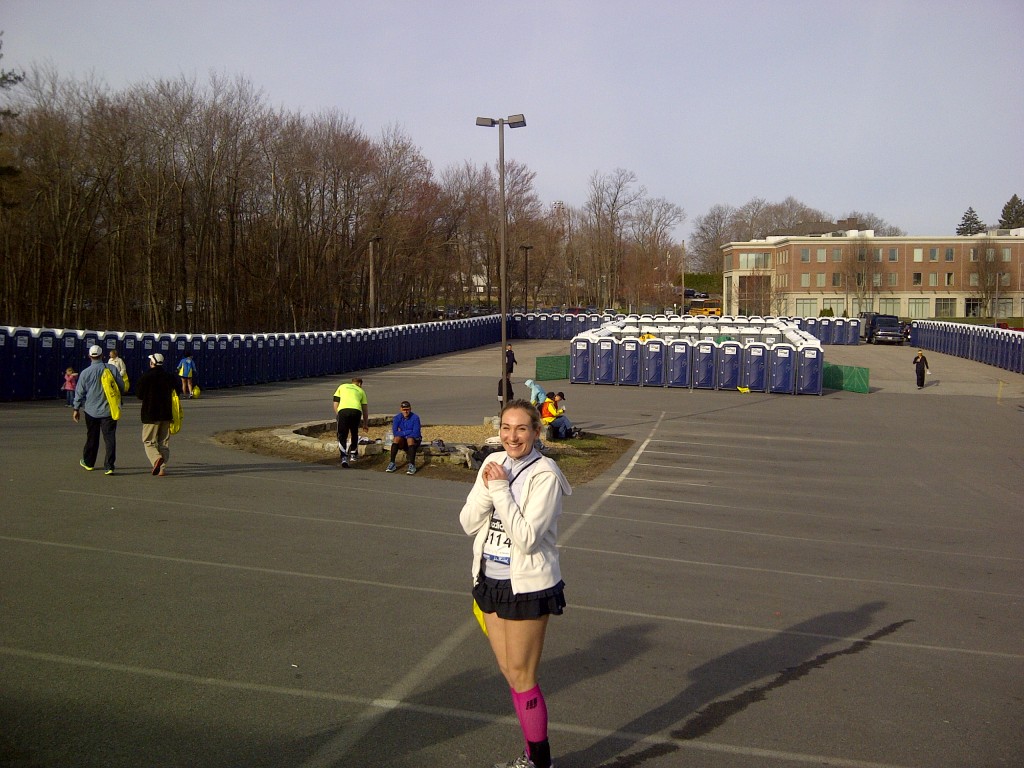 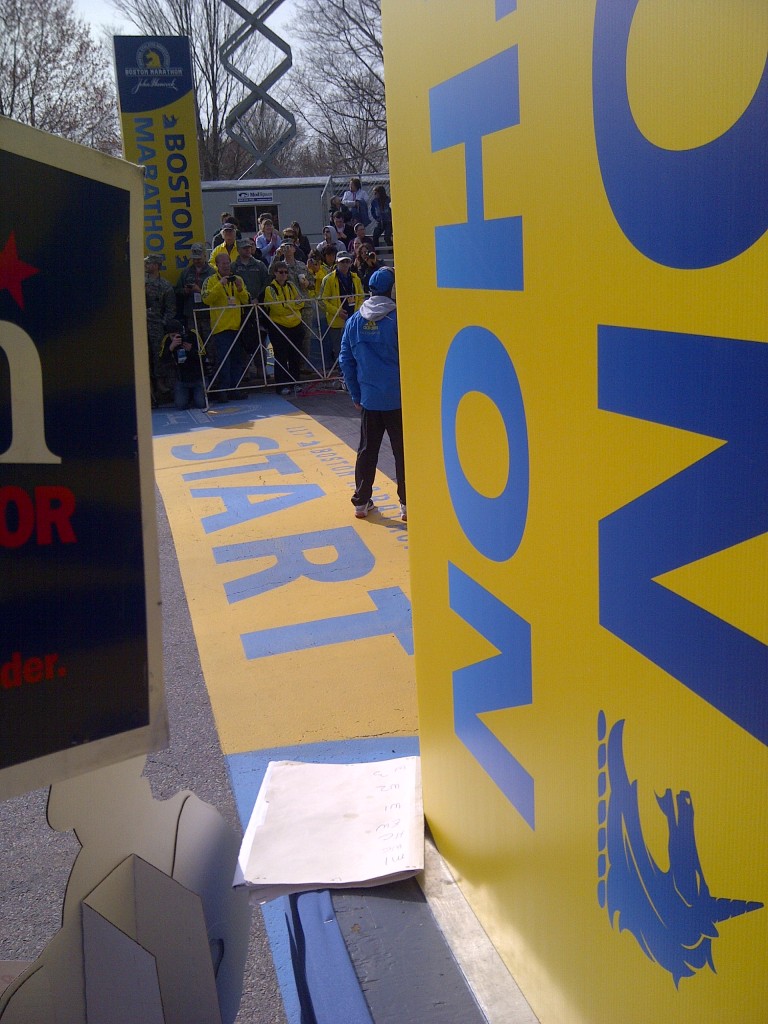 8 Responses to Why I am running Boston (part 2)