Redding, CT is my hometown- so 3 years ago when Race Director John McLeary put together the first annual Run for the Cows I was psyched!  Unfortunately, 3 years ago was NOT my year and I DNF (and tore my plantar facia and spent a LONG time in a walking boot!)- and last year I had not only just run Boston but was still dealing with my stress fracture…..  so 3rd try is a charm?

Sort of. Since Boston was only 2 weeks ago, I knew I wouldn’t be in racing shape- so I ran this race to accompany my Mom for her first ever official half marathon.  My mother is in fantastic shape and frequently runs for several hours on weekend mornings (distances exceeding 16 miles or so)- so we weren’t intimidated by 13.1 miles.  However, there is something mentally different about being timed and having others on the course with you- so we set out to just have a fantastic long run.

The setting for this race is New Pond Farm- a working educational farm that features classes for children and adults as well as a summer camp for city kids who need to experience farm life.  I’ve been visiting the farm since I was a kid- learning how maple syrup is made, where our food comes from, and as they put it “connecting people to the land that enriches and sustains us all”.

The race features a the half marathon, as well as a 7 mile race-  AND a 5k which takes off at 7AM- so that you can also run the half marathon – and earn the distinction of being a true “mighty cow”.  We did not opt for the mighty cow this year- but perhaps if I have a late spring marathon on the docket that would be a perfect way to get more miles in!

The start of the race is right on the farm.  Packet and swag bag pick up was seamless- plenty of volunteers and everyone knew what was going on.  There was the option to get bags the day before- and as a super personal touch, the race director would also allow people to get their things from his home (with an appointment) if necessary.  WOW.

The swag was pretty fantastic, too.  A reusable insulated bag with bottle holders (perfect for milk…..  or wine!), tech t-shirt, mug, mason jar, and a cow bell!

Parking was split between the half and the 7 miler-  half marathoners parked on the farm and 7 milers parked a little down the road at the fire station. 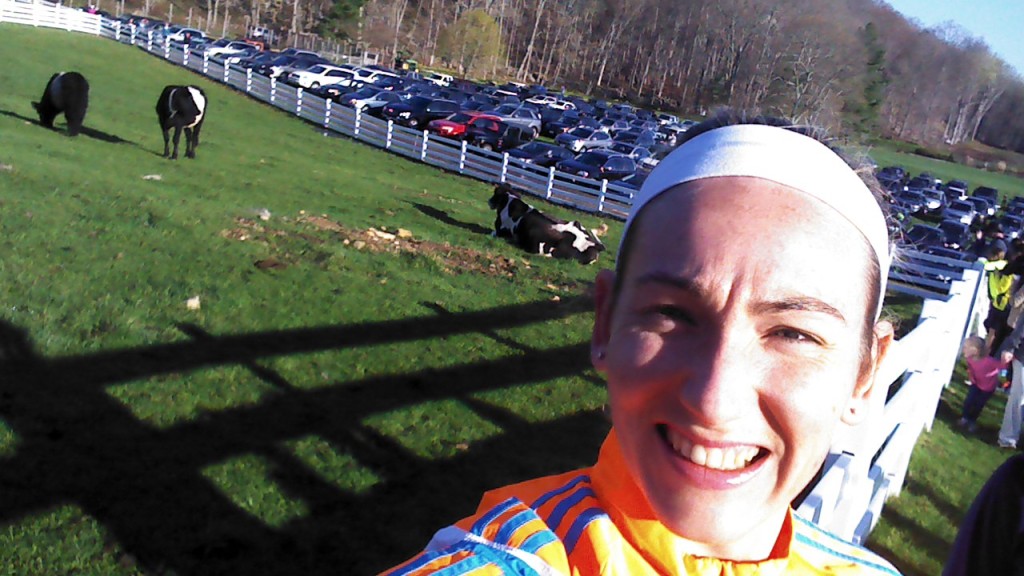 Me and the cows!

The race begins with a short loop on the farm.  The path on the farm is not ideal for racing and in fact large portions of the path were really muddy and footing wasn’t great- not exactly how you want to BEGIN a half marathon.  Considering that there are plenty of scenic roads in Redding, I would skip this portion.

The rest of the race is run through Redding and Danbury- on undulating hills (and some not so undulating!).  The race is not closed to traffic, which lead to some issues on West Redding Road in particular-(a connecting road to route 7 (a massive 4 lane major road))- drivers became quite impatient and one in particular revved his engine and then deliberately drove into a huge puddle, splashing runners.  Ironically, this car also had a motorized wheelchair attached to the back- why would a disabled person/their driver hate on runners so much???

Water stops were plentiful and volunteers were in good spirits!

The course is not easy.  I often found myself thinking “If I was racing this, how would I feel?”  My overall impression was that we were going downhill A LOT- but a quick look at the elevation profile shows that in fact we made some decent climbs.

The steep downhill is one that I would personally do away with.  The course changes from paved to gravel/dirt and heads sharply downhill- if I were running at top speed this would KILL my quads and make me nervous about the remainder of the race- you still have another climb ahead!  (But what doesn’t kill you makes you stronger?) 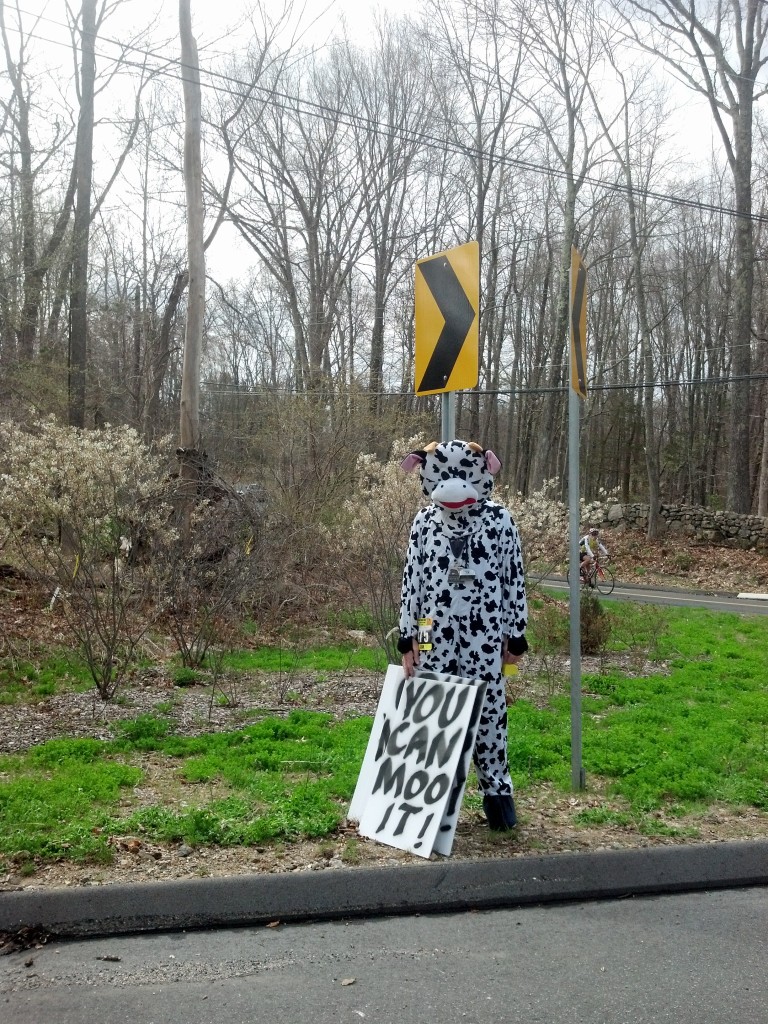 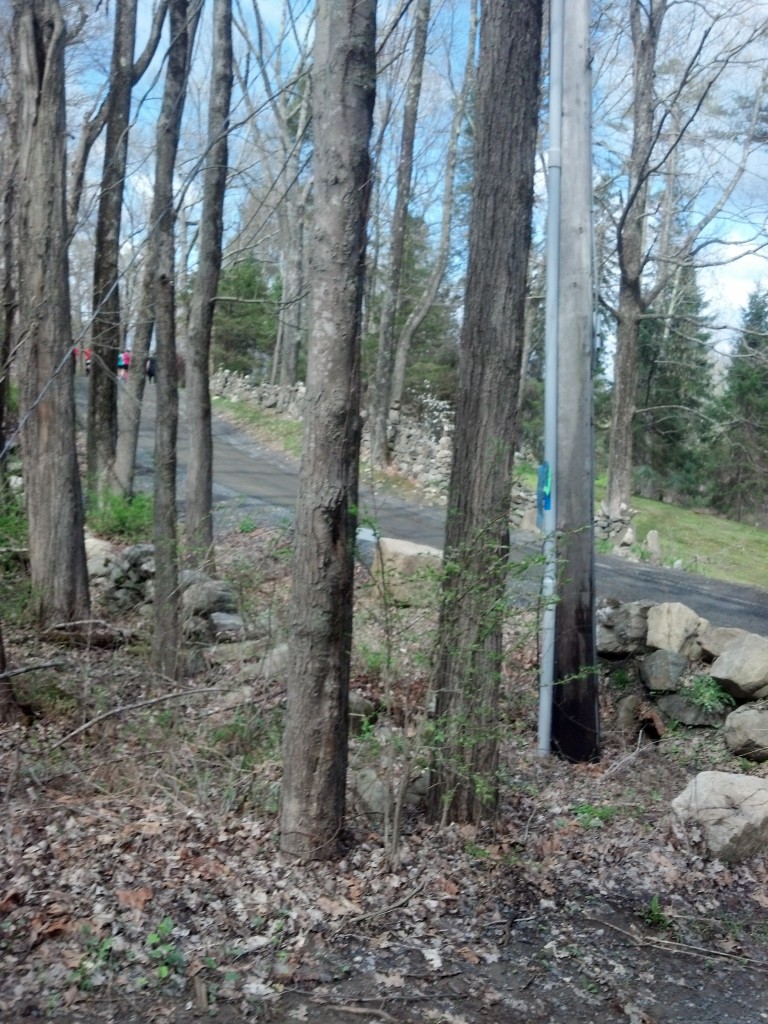 The course is very scenic- and we had a good amount of spirit on the road with us!

Another portion that I would lose (in my ideal world)- the out and back down to Topstone Pond- in my opinion, this added dirt/gravel piece didn’t add much other than distance- and the change in terrain would have made me NUTSO if I was racing.  Also- there wasn’t much to prevent people from running into each other, or even sticking to the course.  The only upside of this portion were the cold sponges- being handed out by kids having a push-up contest!  Talk about spirit! 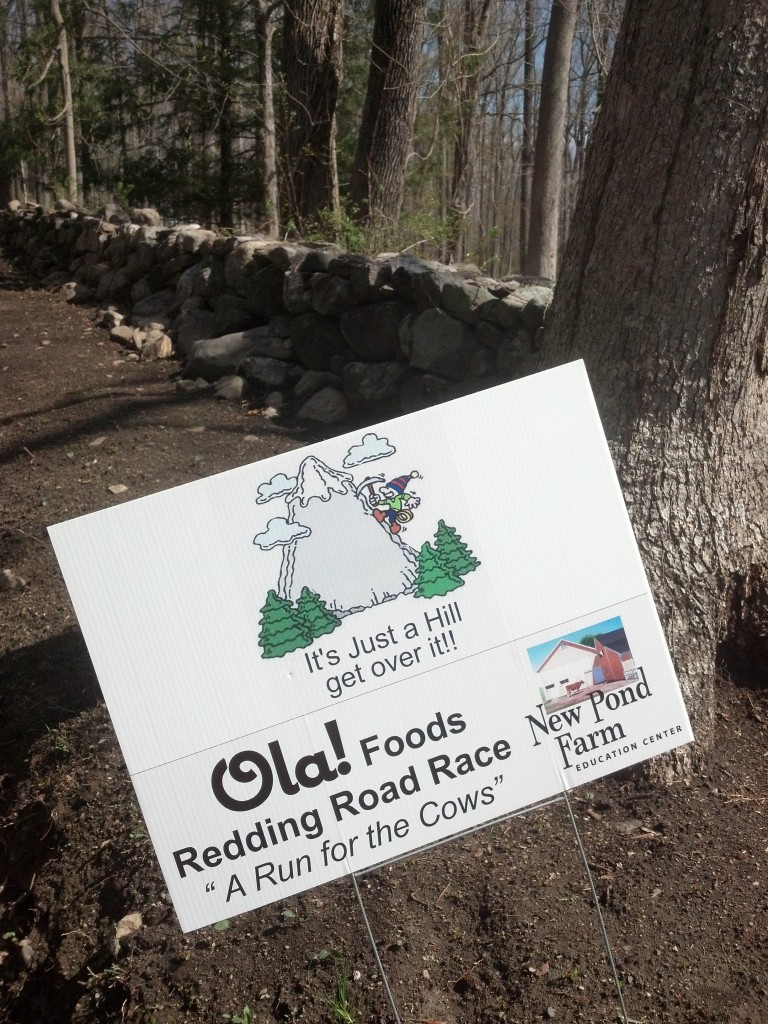 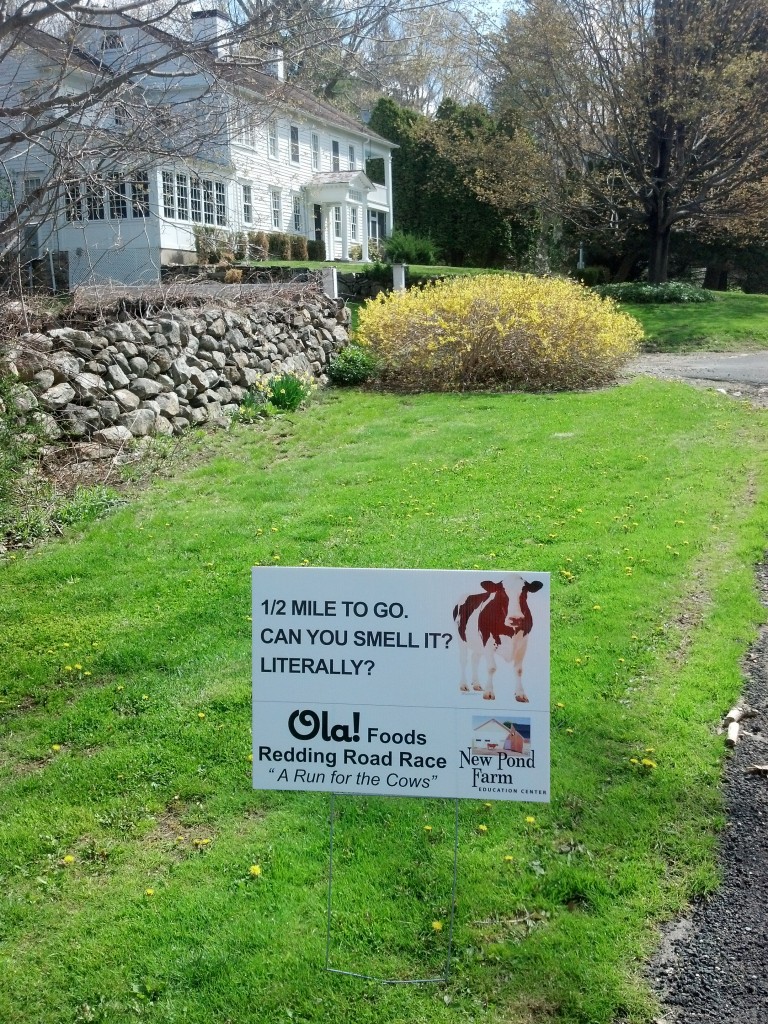 I loved the signs at the end. The last few inclines are not terrible- and as soon as you get over the last hump you have a small downhill into the finish- easily one of the MOST beautiful finish areas I have EVER seen. 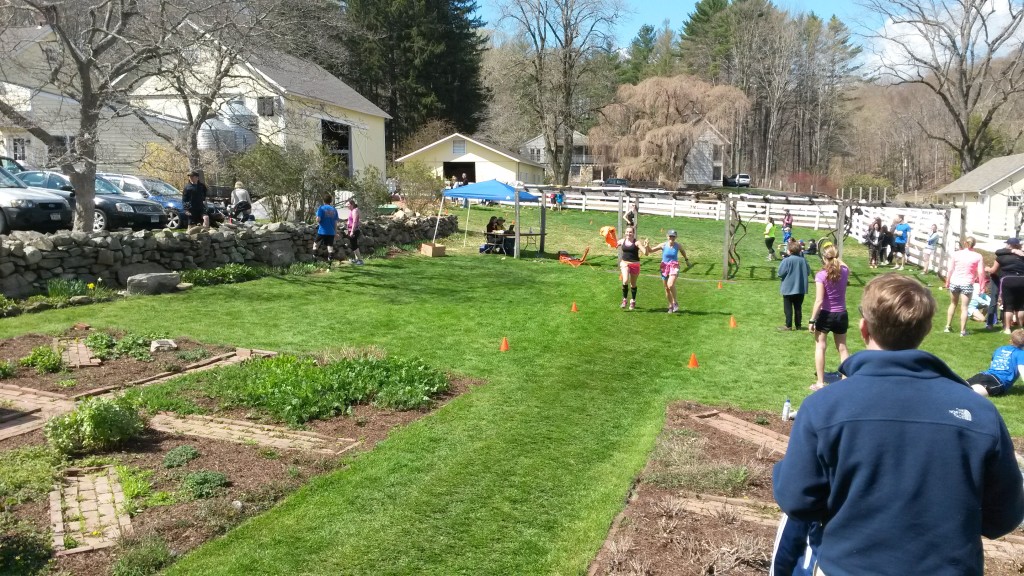 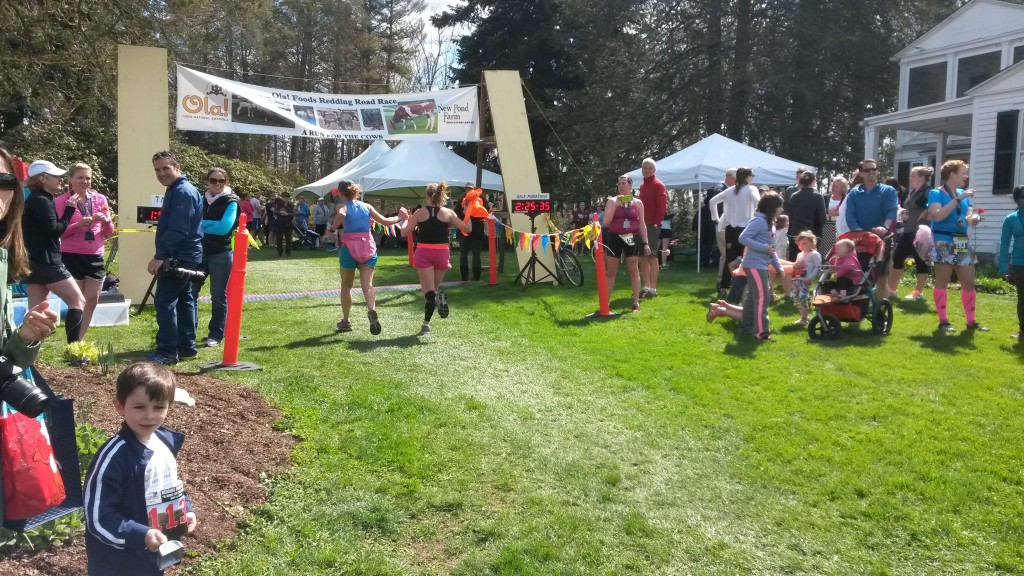 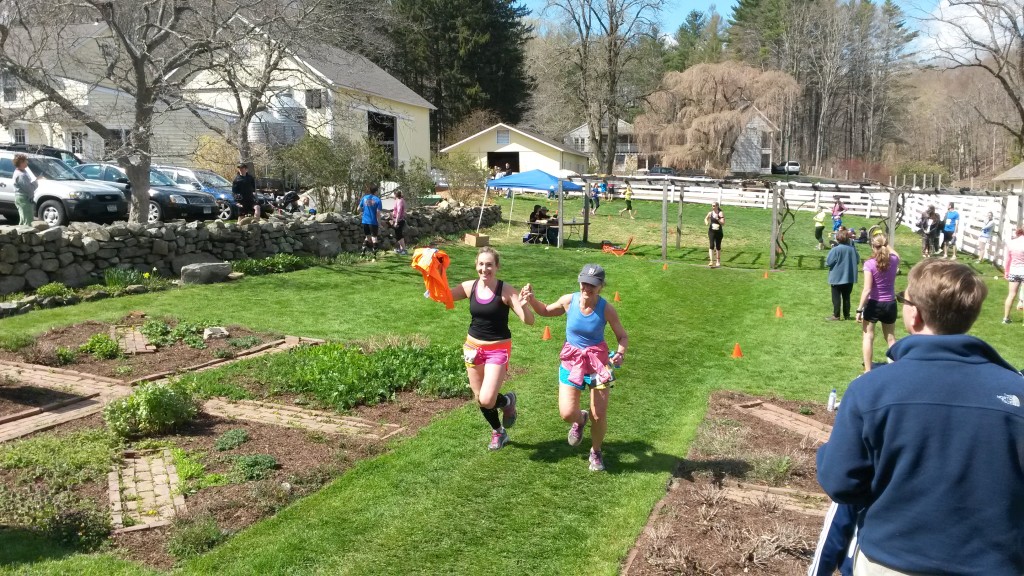 Once finished, you are handed a carnation and a finisher’s medal (it was beautiful- and HEAVY!).

Post-Race food:  pizza, bagels, water, soda- you could really gorge if you wanted to! 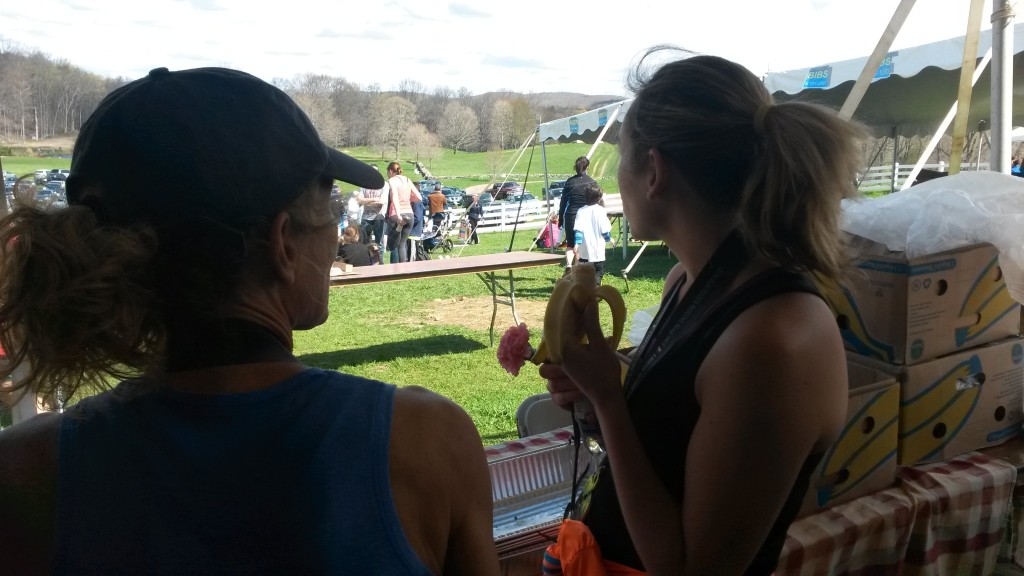 We didn’t hang out long – but I definitely found myself wistful to race this course at some point.  Prizes for winners included cutting boards, pint glasses, plaques, etc.  Getting a decent time on this course would be an indication of toughness- this is no “flat and fast” half marathon!

MEH: portions of the actual course itself.  My mother noted that for a Redding Road race an awful lot of it is run in Danbury.  I could deal without the Redding Road/Starrs plain loop (traffic-y and steep downhill), and also without the Topstone out-and back.

NEEDS IMPROVEMENT: The start! The muddy trail that has you loop around the farm needs to be re-thought.  Loose footing and mud are not a good way to start the race.

If you want to run next year, you need to be diligent!  The race will be open to Redding residents  January 1, 2015!  Later on, it opens to everyone else.  This year the race was run by people from 23 states- and given how beautiful and well supported the run is (regardless of my relatively minor complaints about the course)- it is worth traveling to.

This entry was posted in Race Recaps and tagged race recap, redding, redding road race, redding run for the cows. Bookmark the permalink.

4 Responses to Redding Run for the Cows- Race Review/Recap